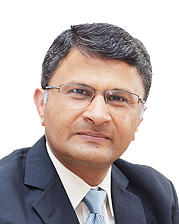 A graduate in Commerce with a Master's in Business Administration, Rahul has extensive experience in the field of Business Development, Marketing and General Management. He joined the Tata Administrative Service in 1990, and has since held senior leadership positions in Tata Group Companies. Previously, he was the Chief - Domestic Business Development & Renewables of Tata Power. Prior to joining Tata Power in 2007, he was Vice-President (Business Development) of Tata Communications Limited. He was appointed as Manager of the Company for a period of 3 years from 3rd August 2011 to 2nd August 2014. He has been appointed as CEO & Director of the Company w.e.f. 27th February 2015.