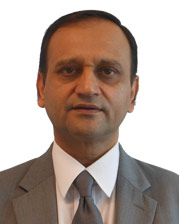 Mr. Khanna has more than three decades of rich experience in areas of renewables, utility, infrastructure, project management & contracts in both India and abroad. Mr. Khanna is an authority in the Renewable industry. Due of his vast knowledge & industry insights, he provides inputs to the government & regulatory bodies which help in formulating progressive policies for the Renewable industry. He is admired for his strategic thinking and commitment for execution excellence.

He has been instrumental in streamlining the business for increased efficiency and profitability by focusing on building state-of-the-art technology, engineering and strengthening employee engagement. His relentless passion for customer delight & pursuit of excellence has helped Tata Power Solar build strong competencies leveraging technology and innovation. After an excellent turnaround of Tata Power Solar by growing the revenue 4 times in the last 4 years which has made it a market leader in the solar segment, Mr. Khanna is now vested with the responsibility of growing renewables business for the Tata Power Group. Prior to Tata Power, Mr. Khanna has been associated with some reputed organizations like Bechtel and Engineering India Limited. He is a firm believer of optimistic approach for growth, teamwork, and positivity.

Mr. Khanna has been a dynamic member of various important forums like CII, FICCI, ICC to name a few. Being an influencer, Mr. Khanna shares his industry experiences with various government authorities which enables the officials to carveout policies or amendments benefiting the industry and consumers.

Besides being an Engineering graduate, he holds a Master’s degree in Management & Systems from IIT Delhi.